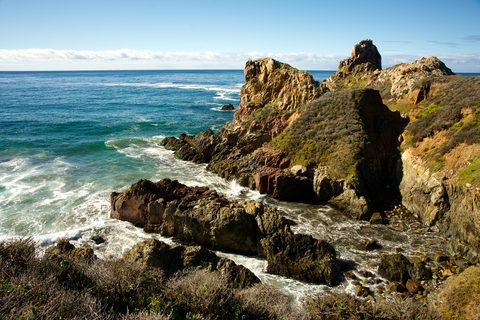 A gray on gray Pacific coast morning begins
as new yellow flowers push
from beneath scarlet  ice plant fingers,
and a mother says goodbye to her son’s ashes.

The hard sandstone hole
where ancient women washed clothes
compassionately holds her knees
and catches drops of her impenetrable sorrow,
as she watches young pups bob in the green sea
while adults watch her watching them.

Alone, though with friends,
she tries to say goodbye,
but will not.
Will not say goodbye to herself.

As the wind touches her cheek
she looks at what once was joined to her soul,
and with a movement from somewhere else,
he descends in beautiful, sweeping billows
to a rich sea that mirrored his life,
as bait fish move into enclosed spaces,
and floating plants, without attachments
aimlessly drift.

Only the tidal sounds are heard as she softly says,
“Bean Hollow,
a good place to say goodbye”.