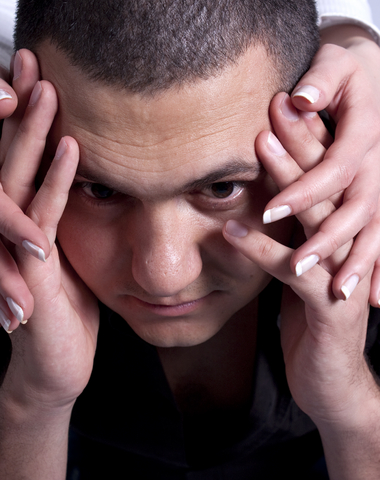 I was asked to write this piece for doctoral students in a clinical psychology program. My approach to counseling is a bit “untraditional” and I didn’t know how well the piece would be accepted. I was pleased with their responses. S. Goldberg (2005) The International Inquirer, October

There is an old story told of a young monk seeking enlightenment. He would sit meditating for long periods of time, waiting for it to engulf him. A teacher, watching him for weeks, sat down next to him and grabbed a piece of broken pottery. Without looking at the student or saying anything, he placed the chard in his lap and began rubbing it with a filthy cloth.

After two hours of silently watching the old man, the student asked a question.

“What are you doing?”

“But how can you make a mirror by polishing a pot shard with a cloth?”

“How can you become enlightened by just sitting?”

Sometimes we know what we want to change, but like the student, not how to do it. Other times, we don’t even know the right questions to ask. In either case, we continue searching, looking for that one key to make our lives and the lives of our clients better.

The search often turns inward–a journey recommended by many therapists and “insight” meditative practitioners. The path often begins by identifying what’s preventing fulfillment. It can range from reliving parental relationships, to painful physical bodywork with the promise of releasing repressed memories.

Unfortunately, when people fail to achieve the success promised through these and other approaches, they blame themselves rather than question the approach’s validity. Most counseling and psychotherapy use a ‘what’s wrong with them’ approach. Therapists search for something in their clients’ personalities or past preventing them from leading more fulfilling lives. This orientation to personal growth and change is something that bewildered the Buddhist monk Thich Nhat Hanh.  He believed that with so many good things in someone’s life, why do therapists want to focus only on what’s wrong?

I believe that it’s more than the half-filled/half-empty glass analogy. Rather, it goes to a basic philosophical issue on how we view the world. The phenomenologist, Merleu-Ponty, wrote about the futility of believing reality is objective. The world, according to phenomenologists, is seen through a complex array of filters which distort emotions, feelings, and events in ways consistent with values and needs. It not only applies to the world outside, but to the one within. Possibly these ideas, originally developed in the early 1900’s by Husserl  were the genesis of the current thrust to look at most psychological problems as nothing more than issues of philosophical conflict.

The inward journey, whether it is to identify a block or an inappropriate value, assumes by getting rid of something negative in our lives, something positive will grow in its place. It’s similar to some urban redevelopment projects. Over several years a house on an otherwise nice block decays and eventually is abandoned. Criminals congregate and the house becomes the center for drug trafficking. The neighborhood finally convinces the city to take action. Officials promise to build a park after they demolish the house. The neighborhood rejoices as they watch the house torn down and a fence placed around the now empty lot. Ten months later, there still isn’t a park and garbage covers the fenced-in space. Until something is built, it will remain an eyesore. Everyone hoped by getting rid of something negative, something positive would automatically replace it. And just as it is with people’s lives, sometimes excising what you don’t like doesn’t always result in something positive developing.  But there is an alternative to focusing on what’s wrong in your clients’ lives. One rarely suggested by therapists—community service.

When one thinks of community service or volunteerism, often the image arises of a bored matron from the suburbs coming into the city to arrange clothing at a charity shop. That’s not what I’m referring to. Rather, it’s the journey one takes with another person, as they move through any of life’s difficult transitions. The Tibetans call it the bardo, a psychological condition, where a person is moving from who she is to who she is becoming.  It’s not a pleasant place. Rather, it’s a condition having the stability of Jell-O.

There is a Buddhist belief, that only by moving into the sharp points in life, does one grow. Community service offers a smorgasbord of them. It’s a place where there is no theory, no objective analysis. It’s a state of being in which your clients get their hands dirty in the lives of other people. And a strange thing happens to their problems. Ones that have been unsuccessfully treated after years of psychotherapy or repetitive personal growth workshops become trivial by comparison. And, without professional help, dissolve.

I remember a person at one of my workshops who spent days struggling with decisions such as which of two equally wonderful jobs he should accept. It was the type of difficulty that pervaded his entire life: how to choose between two acceptable things. One that continually caused him immense emotional turmoil. That changed when, as a volunteer, he was asked by a young woman to help her decide if she should continue heroic medical efforts to prolong her life in pain, or to enter hospice and shortly die.

As therapists, everybody wants to help their clients achieve a better life. Most choose to do it through discussion and insight.  The essayist H.L. Menken wrote, “We are here and it is now. Further than that all human knowledge is moonshine.”  Discussion and insight therapy aren’t necessarily moonshine, but neither do they lead to knowledge. What better way to learn acceptance than to listen to the voice of a mother, realizing her five-year-old son will need supportive care throughout his life? Compassion, by feeding a dying AIDs patient no longer able to hold a fork? Living in the moment, watching a mother cradle her terminally ill newborn during a surprise Mother’s Day party? And, gratitude, in the gentle kiss of a man with ALS as you help him prepare to die?

The mathematician and humanist, Jacob Bronowski said the world can only be grasped by action, not by contemplation. It’s a growing contemporary view with an ancient history that’s found in story of a young man who came to a monastery hoping to learn the secrets of life from an enlightened old monk. After being there one month, he was allowed to ask the master one question.

“Master, what is the secret of life?”

“Have you eaten your rice gruel?” the old man asked.

“Then go wash your bowl.”

Maybe we need to listen to the old master’s methods for enlightenment and ask our clients to wash their bowls.