The Power of Ritual 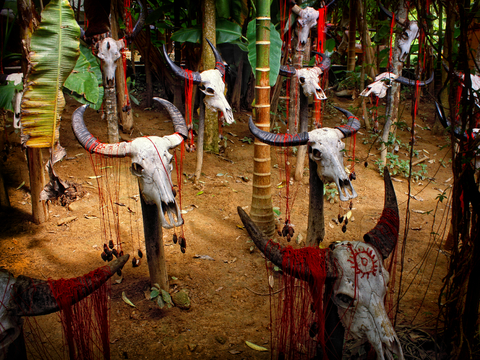 “I never thought such a simple symbolic act would tie me back to my daughter after she died.” Goldberg (2006) Hospice Volunteer Association, May.

It’s easy to dismiss rituals as just the historical trappings of ancient religions. Something very beautiful, but having little relevance to our contemporary lives. Nothing can be further from the truth.

Cardinal Theodore McCarrick of Washington, D.C. explained the genesis of symbols and rituals as things essential in the lives of people who weren’t able to read. That explains their importance during medieval times. But how do you explain its power in 2009? Is there something so fundamental that it crosses all religious and non-religious lines?

Organizations ranging from the local Moose’s Lodge to street gangs view rituals differently. For them, rituals distinguish its members from “outsiders.” Ritual is a way of saying we’re different, we’re special. It may involve the tasseled hats of Masons, the use of bones in Odd Fellow initiations, or the violent retribution a new Blood gang member is expected to deliver against a rival.

Rituals do all of these things, but these are only surface explanations for their power. Rituals serve two important psychological functions.

The first is to give us a connection to the past. Although many people want to run away from their past at full speed, most find there is something unsatisfying when they reach their destination. Robert Penn Warren said that history cannot give us a program for the future, but it can give us a fuller understanding of ourselves, and of our common humanity. Ritual is that link with our personal history, whether it is in the form of something religious or just a simple event in our past.

A number of years ago, I went back to the small eastern Pennsylvania town I lived in until I was fifteen years old. On Main Street I found the Roxie Theater, the place I spent every Saturday afternoon hiding my face whenever Frankenstein appeared and wildly cheering The Lone Ranger as he disarmed the bad guys without ever killing anyone. It was in the morning and the theater wasn’t opened to the public, but the front door was unlocked. I walked in and asked the manager if he would allow me to wonder through it; to relive some of the most joyous moments I had as a child. “Of course, knock yourself out,” he said.

I walked past the refreshment stand, imagining ordering a box of popcorn, went through the entry door on the right, walked down the aisle, and found my favorite seat on the end of the10th row that I sat in 50 years ago. As I settled into it, the images of my past flooded my mind: Abbot and Costello, Hopalong Cassidy, Buck Rogers, and every one of the Our Gang Kids. The only thing missing was scattered  Ju-Ju Bees that would hold my Buster Browns firmly to the floor.

It was a ritual I was performing that was as sacred as any associated with a religion. Just like an ancient religious ceremony it pulled me back to an important part of my life.

Ritual is not inherently related to religion. It can involve supplication through the act of kneeling for Catholics, touching one’s head to the ground for Muslims, prostrating by Buddhists, or in my case, watching a movie that isn’t there. Finding the objects of a past and important experience can create a sense of peacefulness that’s difficult to describe.

Ritual can also provide closure for the present, whether it’s offering a final prayer for the passage of someone we don’t even know, or as I did a few years ago, attending a friend’s celebration of the passing of her Golden Retriever, who was surrounded with flowers, incense and friends remembering their wonderful times with him.