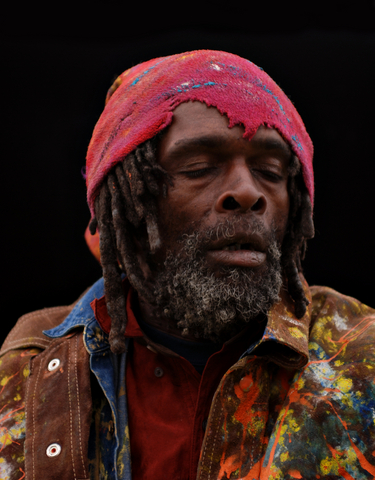 It’s December and I just got off the C train at 53rd and 5th, when I see his arms flailing above the thousands of people ascending the stairs. He defiantly stands halfway up forcing everyone to move around him. Those closest try desperately to avoid brushing against his layers of soiled clothes. He’s in his sixties and wears a red elf’s hat that jumps skyward as he stretches upward, his body moving in sync to the opening words of Good King Wenceslas. First, the words disintegrate into random sounds, then the melody becomes a one-note drone. Eventually, there’s no pretense.

“Ban people not cigarettes,” he yells as two policemen standing off to the side with machine guns flinch, then shake their heads.

“Be a man, cut the umbilical cord to women,” he yells, this time causing many to grimace.

“Marriage brings grief,” he yells, and I see some people nodding in agreement.

“Life is short,” he yells, and heads bow and the incessant holiday hum diminishes. His words follow me into the subway car, echoing off graffitied walls, sandwiched between closing doors, and caressed by the aroma of damp wool. I begin jotting notes so I won’t forget. A young man looks over my shoulder as the train rocks and says, “Should I know you?” I shake my head. “Maybe someday,” I say wistfully.

Across the aisle a man in this thirties has sound buds pushed deep into his ear, masking the screech of steel wheels on twisted tracks. He plays bass on his crutch as Coltrane’s sax gives way for his riff. His right hand plucks imaginary strings as his left forms cords on the metal crutch, and only he hears Naima. Eventually, the frenetic movement of his fingers becomes more steady, more appropriate for playing backup and John once again takes charge to end the set, as he mouths the words Naima, Naima. The bass morphs back into a crutch and the exhausted musician limps out at the Lincoln Center stop.

It’s only a short walk to the S Train when I get off under Grand Central Station. Crowds gently move me forward as if they were friends taking me to a ballgame. Somewhere in front of me I hear the strains of a familiar tune coming from a side passage. I stop and see a balding man leaning against the soot-spackled wall, puffing out sweet notes from an instrument I can’t see through his caressing hands.

He stands alone in the long corridor. His sleeveless wool vest providing warmth, yet enough freedom to play his instrument which I now see is a child’s plastic flutophone. A white threadbare shirt peaks through the holes in his vest, and his pants—still maintaining crisp front pleats—is bunched around his waist and held up with a black belt whose end dangles six inches below the clasp. On the gum-plastered floor is a neatly folded summer jacket and in front of it, a small brown cardboard box that should be filled with bills this time of year, but isn’t.

I stop and hear Silent Night, than Dradel, Dradel, Dradel, and finally Danny Boy. Ignoring me, he opens his eyes and looks into the box, then leans back against the wall. After a few deep breaths he’s playing Mozart’s Sonata in C. Implausible sounds bathe the corridor, but still, no one comes to listen. Those passing one opening continue on to a rap musician’s regular spot. At the other end, it’s a dash to Starbucks before the next train. I move towards him and drop a bill into the empty box. Sounds flow from the child’s toy for thirty minutes as if Mozart had invaded his lungs. Already an hour late for an appointment, I reluctantly leave to catch the 5, and see tears of joy flowing from his eyes.

Not a terribly bad way to begin the holiday season.