The Fear of Change: A 50 Year Perspective 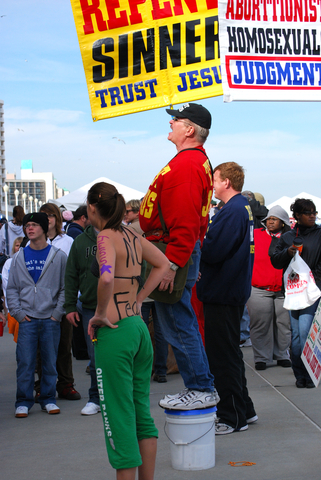 Change is frightening, whether it’s a person coming to terms with a terminal diagnosis or an evangelical minister learning his son is gay. Both are forced to let go of cherished beliefs for a world that has the stability of Jell-O.

For thirty years, I’ve seen it in clients who have lost lifelong abilities due to chronic illnesses and patients who are nearing the end of their lives. What I didn’t realize until recently is that what my clients and patients experienced are similar to the angst of social conservatives.

Fifty years ago, Martin Luther King, Jr. delivered his “I Have A Dream” speech. It engendered hope in some and fear in others. Since then, many events have had similar effects including the peace movement, LGBT rights, the election of an African-American president, the Affordable Care Act, and increased voter access.

Each of these was a lightening rod for cultural change as traumatic to their opponents as were the loss of my client’s abilities and the terminal diagnoses of my patients. And just as those I have served who had difficulty adjusting to their new worlds, so do those whose values are under attack.

In 1964, my parents couldn’t understand why I would go to Alabama to march for equal rights for African Americans. Trying to explain why I was in jail in Montgomery on a hunger strike was frightening to them and unfathomable to their first-generation American friends.

In 1965, I didn’t anticipate the physical threat level to me, and other members of Students for a Democratic Society (SDS) at a peaceful demonstration when we asked only to have a conversation about the war in Vietnam.

I wasn’t prepared for the angry reactions in 2009 to the articles I wrote on the Affordable Care Act (Obamacare) from people who were delighted with Medicare, but feared government

intrusion into their health care. And I was astounded when those who entered into a dialogue with me admitted they never read one word of the more than 600 page document, but rather, were relying on the unimpeachable sources of Glen Beck and Rush Limbaugh.

I was disappointed by the level of vehemence against LGBT rights in 2012 from African-American ministers who walked side-by-side with me for their own civil rights in Alabama, couldn’t see any parallels between what they sought in the 1960’s and what my GLBT friends were demanding in 2013.

From 2008 to the present, I found inexplicable the hyperbolic ranting of senators, congressman, political commentators, and Donald Trump about anything President Obama proposed. I knew their “just say no,” philosophy couldn’t be based only on political differences.

What I’ve recently come to realize is that these individuals, and others who identify themselves as “social conservatives,” have much in common with individuals I served who have lost abilities because of chronic or acute illnesses, or are facing death. Social conservatives—just as my clients and patients—are being pulled from a world were rules are understood and expectations are known, into one that at the very least makes them uncomfortable, and at the worst, attacks values that have shaped their lives. It’s a changing world that’s moving faster than they can.

Although voter suppression is the most current example of this discomfort, it’s the same millennium-old fear of change dressed up in modern clothes. The Tea Party’s slogan, “We want our country back,” echoes the fear of

change found in my culturally insular parents, anti-gay African-American ministers, people with European ancestors who oppose immigration reform, and politicians who long for the days when political power was mostly in the hands of white, protestant Americans.

Change is frightening. Whether it’s the Archbishop of San Francisco professing centuries’ old dogma, Rand Paul living in the fictionalized world of an elitist novelist, my mother trying to understand her son, or your pleasant neighbor harboring strange beliefs about the superiority of one race. All are being dragged, kicking and screaming from a life as comfortable as an old easy chair, into a strange new world.

And what is being challenged is not just an isolated behavior or value, it’s usually something integral to their identity; something that has given meaning to a lifetime of actions and beliefs.

Social conservatives are not just being asked to “do the right thing” because it’s moral. They are being asked to abandon belief systems that have served as the foundation for their personality—whether it’s the belief in racial superiority, the holy union of marriage, a bootstrap approach to life, or who has the right to govern.

So when we listen to rationales that make no sense, drip with hate, or bring us back to a time when justice was a term that didn’t apply to some people, we shouldn’t be surprised. Most are expressions of loss that are as significant to social conservatives as the losses are to the disabled or those coming to terms with the end of their life.

When you watch the hysterical ranting of Fox commentators, read the bizarre justifications of anti-science congressmen denying the existence of greenhouse gases, or are physically confronted by someone who believes our president is the devil incarnate, you might view it as a direct attack against you and your beliefs, but don’t. In the words of the characters in The Godfather, “It’s nothing personal.” It’s not about you or about what they are railing against. It’s a reaction to threats against their identity and way of life. There will always be new social lightning rods, most of which we can’t imagine. But the fear of change will remain constant.