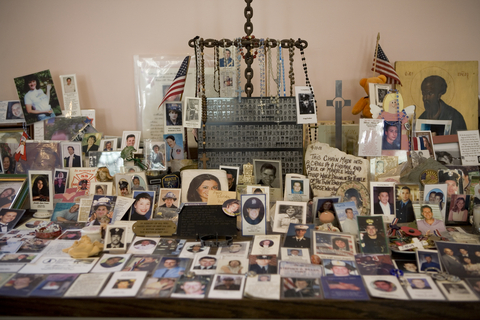 “Daddy, please come,” my daughter said on September 11th. Together, we watched the towers fall. Me, from the safety of my San Francisco home. She, from an office building in Rockefeller Plaza, wondering if her friend survived.

In August, I had scheduled a trip to visit her on September 18th.  Nationwide, the planes were grounded and I didn’t know when the airports would reopen. But I knew I had get to New York. Mostly to give support to my daughter, but having grown up only one-hundred miles from New York City, I felt an affinity not only with the city, but also it’s people and culture. Only a few days before my scheduled departure, the Federal Aviation Administration announced that on September 18th, the planes would start flying again.

As I waited to board my plane at the Oakland International Airport, I heard, “He’s moving towards the gate!” It was a security guard frantically speaking into her walkie-talkie as she tailed a well-dressed man of middle-eastern decent. Within a few minutes, three policemen appeared and trotted through the terminal trying to catch up with her. It was the beginning of ten days where the events I witnessed and was involved in generated emotions that are still as vivid today as when they originally occurred.

In New York City, it began when I went into the subway at Lexington Avenue to get on The 6 Train to lower Manhattan. Walking down the stairs, I  heard the refrains of Ava Maria played on an accordion as pristine pictures of the missing appeared on graffetied walls. The missing were always smiling, sometimes with friends, but mostly with children. “Have you seen him?” “Have you seen her?” the posters read. Throughout New York City they kept reappearing as did the tears of people who stopped to read or even glanced at them.

When I exited two blocks from were the Twin Towers once stood, I saw empty gray buildings beneath a blue sky, as earth generated clouds drifted up and vanished. The smells of devastation and death combined, easily passing through the clean white mask given to me by a tired policeman.

I saw people push to photograph images that were too horrible to forget of twisted steel skeletons guarding lifeless spaces. Spaces that once held the dreams of people whose families waited for news, but already knew.

From atop one building a Sousa march tune blared from speakers for the benefit of people who were too numb to listen or too grieved to care. And phamleteers unashamedly thrust words of salvation and doom into hands willing to accept anything.

I watched reporters trying to tape the perfect interview, while thousands of cell phones described images that had no words, to people who listened, but I’m sure couldn’t understand. And later that day, at the Metropolitan Museum of Art, the entrance to the  Islamic art exhibit was closed.

In the city’s parks, I saw babies play in a world that was newer than they, while pigeons took crumbs from trembling fingers, and emotionally bruised and battered New Yorkers pulled out damp cloths from Gucci suits and stained overalls.

At the half-priced tickets kiosk in Times Square, a steel drum played patriotic songs as an indescribable smell stopped conversations in mid-word, until it moved on, spreading throughout the boroughs.

That evening, my daughter and I walked past candles glowing in front of a fire station in which flags were readied to wrap comrades. Later, in a mostly empty restaurant, we listened to glasses clink to missing friends, as we and other strangers who heard the toasts sobbed along with those offering them.

For six days I aimlessly wondered through a city that I had known in different times and realized it would never be the same. The memories I took back with me to San Francisco were more surreal than a Dali painting. It’s been ten years, but they still slip through the walls of my consciousness, riding on innocent sounds and visions.