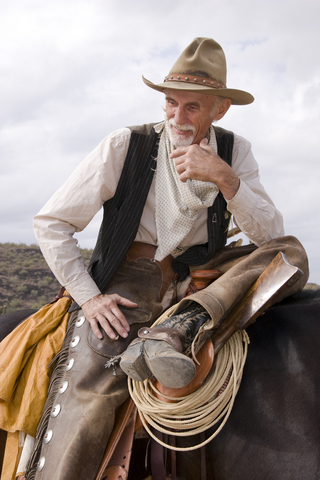 A great day of horseback riding for me is when I can get off the horse and walk. S. Goldberg (2002) Horse and Rider, June

When my wife suggested that we go to a guest ranch for our wedding anniversary, I could see no way out. For years Wendy had been making the same suggestion, and for years circumstances had always (fortunately) intervened.

This year, alas, there wasn’t an excuse in sight. Worse, our son was attending a college within 2 hours of 15 different Arizona guest ranches. It was hopeless. I was fated to spend 4 days with wannabe cowboys dressed in sequined shirts and pointy-toed boots.

Wendy chose the Grapevine Canyon Ranch, a remote working cattle spread about an hour south of Tucson. There we, a couple of middle-aged professionals from the San Francisco Bay Area, would celebrate 31 years together by moving cattle on 70,000 acres of open range. I’ve never understood horses, and the thought of kicking the ribs of a 1,000-pound animal isn’t my idea of a smart thing to do. The last time I’d even been on a horse was when I was 8 years old, at summer camp.

Besides, I’ve always had a problem with the dude ranch concept. I can accept paying someone to pamper me. But spending money for the privilege of taking care of someone else’s (large, dangerous) animals? The logic of that one escaped me. Nevertheless, there we were, driving down a washboard road to the ranch. On a fence post at the entrance was a small box with the inscription, “Leave All Your Problems Here.” Judging by its tiny size, I assumed most of the ranch’s guest must arrive already mellow. I, by contrast, could have filled that box on my own-with problems all related to my apprehensions about dude ranches.

After checking in, I sat on the porch of our cabin and looked 50 miles out to the horizon. The absolute quiet was staggering. No sirens, no traffic noise, no airplanes. Just the wind blowing through the manzanita, birds chirping on oak branches, and small varmints rustling through the grass, trying to avoid my gaze. If only this feeling could last, I thought. If only I didn’t have to ride a horse the next morning, a horse no doubt with a name like “Lightning” or “Outlaw” or “Snaky Jake.” If I had to ride, I wanted a horse named “Laid Back” or “Easy” or “Way Slow.”

At dinner, Wendy and I met people who were obviously no more interested in fancy cowboy clothes than I was. T-shirts and ball caps prevailed. Clearly, these were just folks who genuinely loved to ride horses. As we got acquainted, I could feel my preconceived notions about guest ranches slipping away. The next day, after breakfast, we assembled at the corral, where horses were “fitted” to people with the same attention a good Lower East Side tailor gives to fitting a suit.

Unfortunately, they didn’t have a horse named “Way Slow,” but they did have one named “Dolly,” and she was to be mine for the next 3 days. After we’d mounted, Rusty, one of the wranglers, whistled for our attention. With no apparent guidance, the handsome pinto he was riding pivoted as if on ball bearings and faced us

“We’re going on an easy trail ride, to make sure you know which end of a horse is which,” Rusty said, grinning. “If you make it back, we’ll go on an advanced ride this afternoon.”

Everyone laughed. Everyone, that is, except me. I’d been clear with my fellow guests about my level of horsemanship-essentially that of an experienced merry-go-round rider. Most thought I was joking, until my wife made an “Attention, K-Mart shoppers” announcement.

The others looked at me in amazement. Our ride wound up a gently sloping path. To me, it seemed a rocky, treacherous trail. While others observed the beauty of the scenery, I kept my eyes riveted on the hind legs of the horse in front of me. I wondered how it knew where to put its hind hoofs, as it obviously couldn’t see where they were landing. Glancing at the large, loose boulders strewn carelessly about, I could envision Dolly stumbling and going over the side of the trail, with me yelling my final words to my wife: “I told you we shouldn’t have come!”

“How do they know where to place their hind hoofs,” I asked the rider in front of me.

“Just watch where they land,” he replied. “It’s either exactly where their front hoofs hit, or an inch behind them. Don’t worry,” he added. “Horses don’t fall off level paths.”

When I realized he was probably right, I almost began to relax. Almost. When we reached the ridge top, Craig, our trail guide, gave us our assignment.

“As we ride down into this valley, watch for strays,” he said. “We need to move them down to the main herd. Just stay behind and off to the side of them,” he cautioned. “If you get too close, they’ll turn back on you.”

Great, I thought. An animal with huge horns charging at me. For me, Detroit would have been the right distance to stay behind. Before long, we did indeed see some strays, and with Craig’s guidance, we began moving them toward the herd. I felt a small, unexpected thrill. Here I was, doing the same job cowhands had done for over 200 years. And loving it! This wasn’t the wannabe cowboy activity I’d envisioned. This was genuine, useful, honest work. I turned in the saddle and saw that I was alone. The others had gone back up the hill to bring down a lingering stray. With no one to hear, I waved my baseball cap timidly and tried an imitation of Craig’s cattle call. By the third shout, I no longer had to try; it was a spontaneous expression of the joy I was feeling.

For 30 minutes I was alone with the cattle-my cattle. As I shooed them down the hillside, I thought of the many other peak outdoor experiences I’d had in my life. At that moment, though, I could think of none that was as fulfilling as this. That night at dinner, I heard the ranch owner telling one of the wranglers that a group of strays needed to be rounded up and put back into their pasture the next day.

“Do you think you can find anyone to help?” she asked him.

I just smiled. The next morning, Wendy and I joined nine other volunteers and two wranglers on the 2-mile drive to return the escapees. Shortly after we began, my wife called to me, gesturing urgently for me to join her. I loped Dolly over-yes, I did!-and Wendy pointed to the ground.

There, at the feet of her horse, was a newborn calf with umbilical cord still attached. Its mother had moved off with the rest of the herd and now was standing alone at the edge of the fenced pasture, bellowing frantically. Rusty arrived on the scene, dismounted, and knelt next to the calf. Gently raising it to its feet, he nodded to my wife.

Wendy sat up tall, pulled down her hat, and began gently hazing the little guy back to his mother. As I watched them go, I realized that if the calf hadn’t been spotted, it might well have died on the range. We, the ranch hands, had saved it. Later on, as Wendy and I were leaving Grapevine Canyon Ranch, I mulled over the past 4 days. I thought of the people I’d met, the experiences I’d had, and my new found appreciation of horses and those who love them. As we drove through the gate, I looked at the little box on the post and realized I had nothing-nothing at all–to put in it.