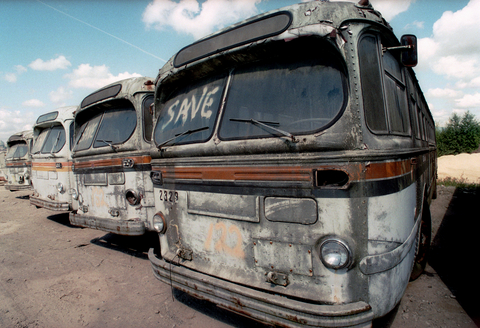 There were many things I did in college that were beyond my mother’s understanding. Becoming involved in the civil rights movement was the most difficult. S. Goldberg (2002) 1st Place National Greyhound Essay Contest

I stepped aboard the chartered bus and sat in a comfortable reclining cloth seat with a pull-down footrest. It looked no different than thousands of other Greyhound buses in the 1960’s. A gleaming silver box with sleek greyhounds painted on both sides that soon would be driven by a driver who was greeting entering passengers with a smile. What I didn’t realize was in twenty-five minutes, this bus would begin a journey that would change the lives of its passengers and the soul of the country.

It was March, 1965 and there was a nationwide call for college students to come to Montgomery, Alabama for the arrival of the civil rights workers marching from Selma. Black citizens were determined to register to vote and white state officials were determined that they would not. We boarded the bus in late afternoon with a variety of emotions and motivations. Most felt a moral obligation to help right a terrible injustice. Others were delighted to be missing classes. And a few were on the hunt for new partners.

The mood on the bus was relaxed as we left the University of Pittsburgh campus. Father Carroll and Rabbi Rubenstein discussed philosophy and moral imperatives with anyone who would listen. Some people formed pairs and started quiet conversations punctuated with affectionate words. Only a few thought about what might happen when we crossed over that imaginary line separating the North from the South. By dusk, folk songs were sung and political impressions had everyone laughing. But in less than ten hours the joyful innocence of this evening would become only a distant memory.

Throughout the night, the bus moved on, quietly through Pennsylvania, West Virginia, Tennessee, and Georgia. With each mile, we moved farther away from what was safe and familiar. As we crossed into Alabama at dawn, we were greeted with a beautiful blue sky and a huge billboard telling us, in no uncertain terms, to go home. Catholics, Jews, the Pope, anybody named Kennedy, Martin Luther King, the President, and northern agitators. We were not welcome and now that we were warned, we should be ready to face the consequences if we continued. On the right side of the sign was a white-hooded Ku Klux Klansman holding a flaming red cross and sitting erect on his white-hooded horse. With the cross pointed directly at our bus, it appeared that the rider was ready to leap off the sign and attack when the order given. Later, we learned that similar signs were erected on every road that entered the state. These signs were intended to intimidate, and they did just that.

Montgomery was still two hours away. Two hours to wonder if the decision to come had been the right one. Two hours to create images of what was waiting for us in a state that publicly proclaimed its hatred for who we were and what we believed in. As we entered Montgomery, the bus driver turned on the announcement system. Through tinny overhead speakers he said, “Can I have your attention please.” He didn’t need to ask for our attention. Although it was one-hunded miles away, everyone still saw that sign, but now in the face of every white person on the street who was staring at our bus.

“I just received a report from our dispatcher that there may be some unruly people on this street. We’re going to turn on to another one to get you to your destination. Now there’s no cause for alarm, but could everyone please move away from the windows”.

Before he even finished saying the last word, rotten vegetables and rocks pelted both sides of the bus. People screamed and dropped to the floor. Through a cracked and smeared window, I saw the distorted faces of hundreds of people. Adults, adolescents and children as young as five, were throwing objects at the bus while hysterically yelling. Although we couldn’t hear them, as each object hit the bus, we could feel their hatred. Behind them stood the Montgomery Mounted Police, some watching impassively, others smiling. The driver increased his speed and abruptly turned left into a narrow alley in which the bus could barely fit. On both sides only the brick walls of the building were visible, now close enough that their cracks and crumbling mortar lines were seen.

Minutes later, we arrived in front of the Jackson Street Baptist Church, located in what had been a quiet black section of Montgomery. We weren’t the first bus to arrive, nor would we be the last. Lining the street were seven other buses, all covered with splattered vegetables and some with broken windows. Within hours, an additional twenty would come. In a daze, we stepped off the bus. After the last person exited, our driver pulled a handkerchief from his back pocket and began cleaning the greyhound on the side of his bus. Although he tried to remove the splattered vegetables, he did little more than rearrange them. Within minutes, a young black man came out of his house carrying a bucket of water and rags. Without saying anything, he moved along side the driver and began cleaning the logo with as much affection as you would give to a loved, messy child. The driver, now with glistening eyes, nodded his head without saying anything. Similar scenes would occur with each new bus that arrived on the street.

For the next ten days, these buses and their drivers stood vigil while we marched, were hit by batons, trampled by horses, jailed, completed a hunger strike and spent intimate moments with Martin Luther King. They were waiting to take us home. Throughout our stay, every newspaper in the country, and many throughout the world, carried stories of the events in Montgomery and the march from Selma. In most of the pictures, only the non-violent demonstrators and their frenzied tormentors could be seen. In a few, the Greyhound buses, clean and guarded by their drivers and the community’s residents were visible.

Our journey home would be very different from the ride to Montgomery. No songs were sung, nobody arranged dates, philosophic discussions didn’t occur. We had witnessed and experienced the extremes of human behavior, from self-sacrifice to murder. During the fifteen hour ride, most reflected on what had happened to them, and how their lives would forever be changed.

It has been thirty-six years since the Selma to Montgomery March took place. Many view it as the turning point in the civil rights movement and have offered tributes to its participants: Martin Luther King, Julian Bond, Ralph Abernathy, James Farmer, James Foreman, Stokely Carmichael, the college students who risked their lives, and the people who lost theirs’ for an ideal. Everyone has received the praise they deserved except for one important player.The bus. In the 1960’s driving to the south in a car was too dangerous and flying there cost more than most college students could afford. The only safe and affordable way to Montgomery was on chartered buses, most of which were Greyhounds. It was in these chariots of conscience that committed young people became involved in an event that galvanized the country’s attention and made civil rights something more than a vague concept. Without the buses in the 1960’s, the civil rights movement would still have progressed, but I don’t think at the speed that it did.

I doubt any of these buses survived. When they were retired from service, most were converted into traveling motels for hippie communes, rock groups, and country bands. By now, I’m sure, all have been crushed into blocks of steel, unceremoniously trucked to smelting mills, and endlessly recycled into useful and common objects. But these buses were anything but common.