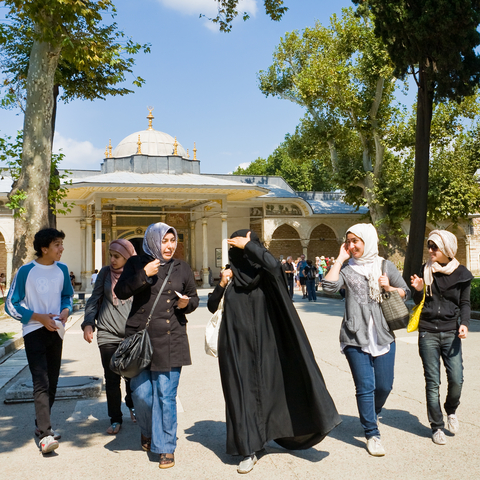 I was reluctant to tell my new hospice patient in San Francisco that I would be traveling in Turkey for the next two weeks. Two weeks for me was a short amount of time. For a dying man, it would most likely be a significant portion of the life he had left. But it was a trip my wife and I had scheduled six months prior, and as is the case with so many things, my life involves a merging of these two schedules.

“Why do you travel ?” my patient asked.

Judging by the tone of his voice, I thought he was looking for more than the usual common answers such as “to experience another culture,” “to relax,” or any of various reasons related to escaping from an ordinary life.

Many strange thing happens when you’re at the bedside of a dying man. One is the mystical connection that often develops. If I tried to describe it, you might say, “What on earth does he mean?” So, instead I’ll use a more practical, useful explanation.

I think we all walk around with holes in our souls and minds that cry out to be filled. We may be trying to determine why our relationships are not fulfilling. How we can move on after being offended by an unskillful person. Why we aren’t happy. Or why other distressing conditions remain despite our best efforts to rid ourselves of them.

What I have continually experienced at the bedside is that the honesty of the person who is dying is so profound, that the lessons they provide me—none of which I ask for—sweep over my consciousness, and where there are holes, the most appropriate ones settle in, and the remainder move on. It’s almost as if I’m on a street in San Francisco with potholes crying out to have a little asphalt thrown into them. The only thing required to fill my holes is to listen and nonjudgmentally observe what I experience.

And that’s what I decided to do in Turkey. Flying over the Atlantic I asked myself what holes I needed to fill. There were many, and instead of choosing one, I decided to do what has always worked in hospice: just observe and allow what was most significant to make on impact on me. I didn’t have long to wait. When we arrived, almost immediately my attention was drawn to aspects of Turkish life that involved “adjustment,” rather than “conflict.”

I saw it in Muslim women’s head scarves signifying fundamental Islamic values, that were made from the finest European silks. In women wearing gray trench coats hiding everything from neck to ankle, as they walked arm-in-arm with other women who could have stepped out of Vogue.

I heard about it from a tour guide who explained that the ban on wearing head scarves in schools and universities was ignored if they were covered by baseball caps.

I felt it as our driver took us through the ancient streets of Istanbul in an elegant Mercedes touring van with all of the latest electronic devices, as my feet rested on an old Turkish rug that softened the European origin of a car made by a past invader.

I heard it in the form of a digitally recorded call for prayer echoing through the narrow streets in Istanbul from 3000 mosques, as a street musician improvised an accompanying jazz rift on his Kabak Kemane, an ancient bowed instrument, and I watched it on the faces of shop owners intent on completing a business transaction, regardless of the Imam’s words.

I saw it on the walls of the 2200-year-old Hagia Sofia where its conversion from a Byzantine church to a mosque was allowed by Sultan Mehmed II, who refused to destroy the frescoes and mosaics depicting the life of Jesus; instead covering the iconic faces with removable paint and plaster.

I experienced it as diners sat down for an evening meal in an outdoor cafe, and watched a group of eight Muslim woman dressed in black, each with one crutch, some with young children, scream at each other—presumably who had to right to ask for baksheesh (money), as annoyed Muslim non-sectarian policemen ordered them to disperse and stop bothering the tourists.

In horror, I witnessed  the inability to adjust as a cruise ship passenger—one of thousands—cuing in line to see the Sultan’s treasures, yelled at people behind him who were six abreast “Not to jump the line,” while ignoring the exquisite carvings in front of him.

I heard it in the sound of the metro trolley hooting it’s horn as an Asian tourist stood in front of it snapping endless photographs while expecting the car to slow down in order for him to take home the perfect shot—and it did.

I saw it watching poor children diving between multi-million-dollar mansions on the Bosphorus with its treacherous tides, trying to cool off during the unseasonably hot September afternoon while old men wearing tattered clothes caught anchovies on multiple hooks for their families evening meal.

I heard it listening to people extolling the quality of Armenian and Kurdish food as if neither culture had a painful history in Turkey.

In Cappadocia I felt it crawling through endless caves dug into the soft rocks by Christians in the first century, preferring life without sunlight to death by Roman soldiers.

I witnessed it in the farmlands surrounding Izmir as Muslim men and women avoided eye contact on the road as my wife reminded me that saying hello to everyone, especially women was not a culturally correct thing to do.

I felt it rising at dawn in a hot air balloon over Göreme and saw the wonders of this country on a vessel guided by wind, something the pilot had no control over.

I tasted it when offered pumpkin seeds in a field whose meat was always left for the animals to eat.

I marveled at the cats who respectfully sat on the pavement by my table and waited for me to offer them food, gracefully moving on when I didn’t.

I felt it in the coldness of the onyx blades used to carve out an underground city that housed 40,000 people, that 1000 years later would be used to make lifeless miniature Sufis for the tourist trade.

And I imagined the thousands of pidgins at the entrance of 3000-year-old caves signaling the approach of Roman Legends, while providing it’s inhabitants with eggs, meat, and guano.

So what did I learn from this 8000-mile journey that crossed 11 time zones? We have choices in life: we can either adjust to the circumstances over which we may have little or no control, or pretend that we do, and as did the few early Christians who didn’t want to live in caves, endure consequences far worse than not seeing the sun.

Possibly I could have learned the same lesson closer to home, say in Daly City or Hayward. But then, it wouldn’t have been an adventure and I wouldn’t have realized the importance of visiting cities where cruise ships don’t dock.